An extinct vulcano,some three and a half million years old,with jagged peaks rising to 5200m,Mount Kenya is Africas second highest mountain after Mount Kilimanjaro in Tansania.Its heart is actually the remains of a gigantic volcanic plug,the mountain stood at over 7200m above sea level about a million years ago,from which most of the outpourings of lavaand ash have been eroded by glacial action action to create the distinctive silhouette.These peaks are permanently iced with snow and glaciers,though the glaciers are retreating due to climate change.On the upper slopes,the combination of altitude and a position astride the equator results in forms of vegetation that only exists here and at a few other lofty points in East Africa.Europe first heard about the mountain when the missionary Krapf saw it in 1849,but his stories of snow on the equator were not taken seriously.It was only in 1883 that the young Scottish traveller,Joseph Thompson,confirmed its existence to the Western world.The Kikuyu,Masai and other peoples living in the vicinity had venerated the mountain for centuries.Park rangers still occassionally report finding eldery Kikuyu high up on the moorlands,drawn by the presence of Ngai,whose dwelling place this is.It is not known ,however,whether anyone had actually scaled the peaks before Sir Halford Mackinder reached the highest,Batian,in 1899.Another thirty years passed before Nelion,10m lower,but a tougher climb was conquered.Both are named after nineteenth century Masai laibon or ritual leaders. 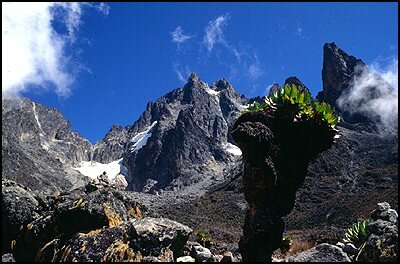 Keeping Mount Kenya clean : The Kikuyu and other tribes venerated Mount Kenya - Kirinyaga - as the dwelling place of the supreme God Ngai.If you went beyond the peaks,some thought,you would find him.Medicine men and and diviners routinely trekked up the the mountain to seek his guidance,miraculous cures or simply inspiration.Nowadays it is mainly tourists who retread their steps: ca 15000 each year . Few of them,it seems,particularlyrespect,never mind venerate,the old mountain god,and several dozen tonnes of rubbish are left on its side every year,only part of it is removed mainly by boy scouts and other voluntary groups.Please take your trash down with you . Thank you . Climbing Mount Kenya : There are four main routes up Mount Kenya.The Naro Moru trail provides the shortest and steepest way way to the top The Burguret and Sirimon trails from the northwest are less well trodden.Sirimon has a reputation for lots of wildlife,while Burguret passes through a long stretch of dense forest.The fourth,the Chogoria trail,is a beautiful but much longer ascent up the eastern flank of the moutain.Batian 5199m and Nelion 5189m are accessible only to the experienced and fully equipped mountaineers.They look almost vertical and the easiest route is Grade IV,making them a lot more testing than most of the routes up the Matterhorn ! If you want to climb these peaks,you should join the Mountain Club of Kenya at Wilson Airport in Nairobi .They will not only put you in touch with the right people,but also give you reductions on hut fees .On the question of cost,climbing Mount Kenya is an expensive business.A four day trek for two people,excluding guides or porters,costs anything between KSh 6000 - 11000 (including park fees,overnights,food,and transport to the roadhead,not includingany additional equipment and tent rental )The cost of one porter/guide for this period would add anything between KSh 2000-4500 to the tally,whilst an organized trek easily costs over USD 100 a day.The park itself operates a sign in/sign out system and you pay fees on entryfor your anticipated stay.It is a bad idea to try to evade the exit gate on departure if you have stayed longer than intended:they will go looking for you and eventually organize anair search if you do not show up ! Stories circulate of people being pursued to Nairobi and beyond for non-payment of huge rescue service bills.If you need to change money,do so in Nairobi or in the big ring road towns of Njeri,Nanyuki,Meru,Embu or Karatina. Chogoria has no exchange facilities and neither has Naro Moru